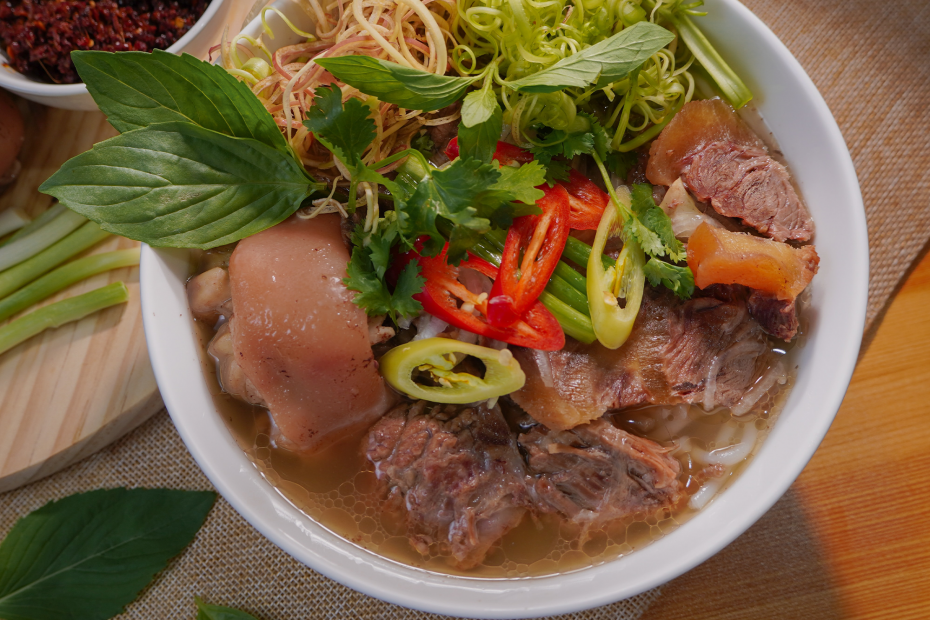 Usually mispronounced, but a scrumptious eatery, Pho, is one of our favorites. The amount of nutrients this one bowl of soup carries justifies its status as Vietnam’s national dish. In this article, we will tell you how to make Pho at home and bring the taste of Vietnam to your dining table. Pho Recipe is time-consuming, but every bite makes each second spent on it worthwhile. Moreover, we have broken down the Pho recipe into steps, so you may prepare it without spending a lot of time and enjoy a break from monotonous soup bowls.

Pho recipe’s origin lies in the late 19th & early 20th centuries in Northern Vietnam. With the passage of time, Pho Recipe evolved from a noodle soup having slices of buffalo meat in broth with rice vermicelli. Some alterations in the dish occurred when it moved to the southern part of the country in 1954. Chefs used sweeteners in their broth and used an array of herbs. Over the years, Pho was experimented with several items like brown rice noodles and pho noodle rolls. It is a national dish and has become a local pride and contention. Moreover, every region has its own preferred choice of ingredients.

If you have not prepared Pho at home yet, you are definitely missing out on a lot. Follow our easy Pho Recipe today, and no other soup bowl will attract you anymore.

To make the Pho Soup, you will need the following ingredients:

Pho Broth is prepared by boiling the beef knuckles and leg bones in water with other spices. We recommend you to bake the ingredients and beef pieces to add extra flavors as well as save time.

In a baking tray, spread a tin foil sheet and place cross-cut beef knuckles and leg bones. Sprinkle a little amount of salt, black pepper powder, and olive oil. Then place the tray in a preheated oven at 100 degrees for 12 minutes.

When the beef is charred or turned dark brown, and your kitchen is aromatic, take out the tray carefully. Dish out the beef pieces.

Place quartered onions and halved ginger in the same tray and bake them for 10 minutes. Baking these ingredients will add exquisite flavor to Pho, which cannot be achieved by only boiling them in water.

Meanwhile, roast the chuck piece from each side for 2 to minutes until it turns deep brown.

After baking the ingredients and beef pieces, it is time to prepare the broth for African Pho Soup. Take a deep stockpot that has the capacity to contain at least 6 quarts of water. Place the baked beef pieces and bones of beef, add chuck roast, and pour 6 quarts of cold water. The cold water helps the beef pieces release taste better. Then after five minutes, turn on the flame.

As the water shall begin to boil, the scum from the beef pieces shall begin to form at the surface of the stock. To make the soup healthier, keep removing it with the help of a strainer.

As it begins to boil lightly, add onions, ginger, garlic, coriander seeds, fennel seeds, star anise, and black cardamom pod in a muslin cloth. Place this in the broth and keep boiling for three hours. Then add salt, rock sugar, and fish sauce to the broth. If the scum keeps forming in the broth, keep removing it.

After three hours, dish out the bones and beef pieces with the help of tongs, strain the broth with the help of a strainer and remove the spices from it as much as you can. Your Pho broth is prepared.

Thinly slice the chuck roast, de-bone the meat, and save it for later use.

When the broth is under preparation, boil the noodles.

Take a deep pan, fill it with water, and bring it to a boil. Then just before you are about to add noodles to it, sprinkle some salt and 1 tsp of olive oil. It will prevent the noodles from tasting bland.

Dingolay Gourmet Hot Sauce will add flavors to this soup bowl that you have never tasted before.

Side Dishes to Serve with African Pho

Pho is one of the best soups to serve at a dainty dinner. With high in nutrients, it can be paired up with several dishes.

Serve Pho with Calamari Rings and Gua Bao. It will taste heavenly, and you will be able to prepare a proper dinner out of it.

How to Customize Pho?

This Vietnamese beef noodle soup can be customized with a lot of flavors. This bowl of soup is nothing short of perfection. When it comes to the quantity of noodles, meat, condiments and garnishes, one can add these as per their choice.

Traditionally, Pho is prepared with Beef, but you can prepare it with chicken as well. Simply replace beef with chicken and prepare a delicious and quick pho soup bowl to make chicken pho.

How to Store Pho?

You can store extra quantities of Pho broth. In an airtight container, pour the extra broth and freeze it for up to two months. Similarly, you can freeze the beef strips as well. Only boil the noodles, warm up the broth and meat, and enjoy a Pho bowl in a matter of a few minutes.

Dingolay Gourmet Hot Sauce is prepared with exclusive Jamaican ingredients that make your food taste completely out of the world. Prepared with Jamaican Scotch Bonnet Peppers, ripened Mangoes, Pineapples, pickled garlic, carrots, and other Jamaican spices. All these ingredients combined prepare a sauce that brings exquisite flavors to your regular tasting meal.

Moreover, these sauces are gluten-free and vegan-friendly, with several health benefits because they are prepared with 100% natural ingredients. Available in three different flavors, Original Gourmet Hot Sauce, Mango, and Pineapple Hot Sauce, we have every flavor in store for you. If you like your food to be spicy and hot, go for the Original Dingolay Hot Sauce. If you are a fan of fruits and like the sweet yet fiery flavor, then Pineapple and Mango Hot sauce are the Good options for you.

Paired Pho Soup with Dingolay Gourmet Hot Sauces and added to your regular soup bowl the flavors that it has been missing. Furthermore, it only enhances and adds up to the natural flavors of Pho. Try our easiest Pho Recipe today, and do let us know your experience in the comment section below.